Samkele Dandala
3 months later, no product, no delivery
We bought a fridge on Black Friday last year and we still have not received it.!!

We bought a fridge from Ok Furniture in Mount Ayliff and we sitll have not received it, Every time we call we are told stick will come but it has een almost 3 months now. In December the lady at the branch said other people got other fridges in that range and we should do the same of wait until the 15th of January, the fridge will come then. We have been going there since then and they tell us that they haven't received a new date of when the stock is coming, no communication, no apology, nothing!! Absolutely pathetic!! 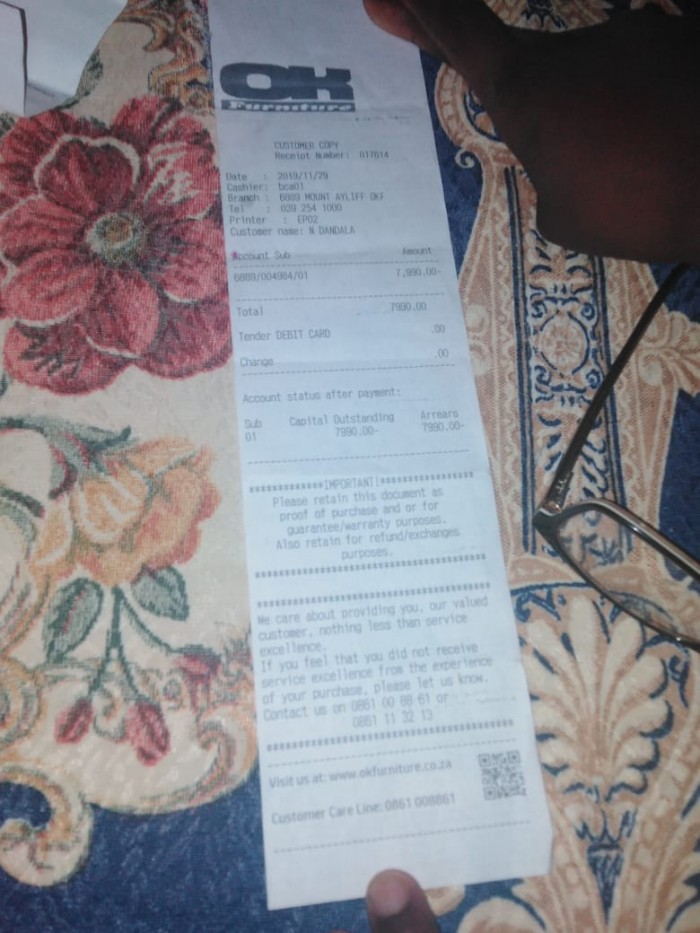 here to report that i TOOK a tv ON CREDIT at MQANDULI BRANCH last year Novemver 2019 then January this hisense thing gave me something, it started by having a black line across the screen secondly it use audio with no video i reported it they say i must bring it back then i did as they say later January 2020 since then i haven't receive any feedback what worries me end of the month you keep reminding non-stop about payment while you guys don't care about our assets its really bad you don't care at all

Junibra lungile Mkhize
Queen bed
I have purchased a queen bed from OK in pinetown Kzn and the Queen bed the form on it, it has lamps the rap came to my house last year December and took some photos of the bed and he said it was going to be replaced am still waiting until today no one is calling me and update me about my queen bed. Here am lying on a very uncomfortable bed which cost a lot of money.
Comment
COMPLAINT #2554 - Product Issues

bas heilbron
defy cooker hood
This is my 5th email.i purchased a c/hood 22/10/19 although the box was damaged the contents looked fine .we have just moved into the house and were not in when it was installed.When i got home the installer showed me that the hood was damaged and the grills were bent.I know i should've returned it straight away and asked if there is any way that you could help me as the dents show,but i have not received any replies.

I would like to register a grievance against OK Furniture, Shoprite outlet in Gaborone, Botswana on the above subject.

Last year i entered into a contract with the shop for the purchase of a couch. I was assisted by the gentleman called Keaja.

I paid monthly installment of P 1,700.00 for six months without fail. At the end of contract, i received online statement indicating that i had a balance. I immediately liaised with the contact person who was assisting with the purchase (Mr. Keaja)who re-affirmed that the initial contract still stands, thereby i should not be bothered by the online notifications. Apparently, he stretched the period of the contract without my knowledge just so that my purchased is approved.

I wish to point out that i continued to receive further notification even after he had promised to issue a clearance letter. I then met with the Shop manager to explain the issue. Mr. Tsheko, the Shop managed promised to settle the matter with Head Office.

Even now i still receive such notifications. Through this communique, i write to request for your intervention.

Vincent kheswa
Poor service delivery
I bought a Telefunken flat screen TV at evaton mall in 2017 and it started giving me problems in September this year and i took it back to the store for repairs, they promised to contact me as soon as it was fixed. A month later without receiving any call i decided to call them myself. When i called they told me the tv was back i should come and collect it. When i got there the tv was back but the screen was damaged. Without informing me of what was going to happen from there on they just told me to leave it and they will call me. A week later i called and asked what was happening. They told me they were trying to find a new tv for me and they will call as soon as they get it but they never called till i called them myself again they told me to come the next day and collect it. The next day they called and told me the tv was not there yet they will call when its there. Later that day i called to ask if it has arrived yet. They told me they will check and get back at me and never did. Then i decided to go there myself. When i got there they told me the tv was at a nearby mall and it will come the following day surely i will get it the next day. Next day when i got there they guys i spoke to the previous day wasn't there and the tv was still not there they told me it got collected from the mall it was now at the warehouse it will arrive on Monday.. it's been a month and weeks now without my tv and the store has failed me. Their customer service is not good
Comment
COMPLAINT #2285 - Customer Service Issues

Lydia Hanser
Bad customer service from OK Furniture Kimberley
I bought a bed at OK Furniture Kimberley last year and a few months after the bed started giving problems. I reported the problem to the manager (Olivia) and she said I should sent her WhatsApp pictures of the bed which I did. She kept on phoning to inform me that she is still busy with my request and that she didn't forget. Next months I went back and was told that there was a new manager (Celeste) the old one resigned. The new manager told me that she could not find anything logged on her system and told me she can't assist because the bed was no longer under guarantee but she will follow up with the bed company and hear if they did receive a complaint. She didn't come back to me for more than two weeks. I phoned her and she explained that I have to pay R450 for them to replace the mattress only. I feel this is unfair towards me as it is not my fault that the manager who handled my query resigned. If they had sold quality product to me in the first place this wouldn't have been the case. I feel like taking that bed there and drop it in front of their door and insist on all may money back.
Comment
COMPLAINT #2282 - Refund / Exchange Issues

Ntombizanele Gontsana
Poor service
I am so crossed with OK Furniture. I laybyed a Queen bed in East London on the 2nd September and on the 15 October i paid all the money and left with R100 which i will pay on collection and I told them on the 28th i will come and fetch my bed. Now on the 25th i received a call telling me to come on Monday the 28. on the 28th i phoned telling them in coming to fetch they said no they dont have it in store. I must wait for a Truck from Queenstown/ King Williams Town. today I phoned they still saying the same story. what must i do, tomorrow I am moving from where I stay and will have to leave this bed here. where am I gonna sleep on. I will go all out and expose this treatment. I don't deserve this.

Simone
Disgusted by OK Customer Service and Broken products sold as new
I have purchased a JVC television at OK- Belhar, Cape Town in 2017, 8 months later the tv just went blank, when I informed the store, the only question posed was "did I pay the last installment", no further assistance. I took the tv back to the store myself, waited nearly a month for a replacement (while still having to pay for a product that was not even in my possession and was forced to take the same brand again, The staff at OK would not even try to assist, it seemed like this became my problem (exactly what happened to my parents a few years ago when purchasing a Fridge and Microwave from OK, when informing the store about the broken products, they just ignored it) I then accepted the "NEW" JVC tv, but was no longer satisfied with the product, the horrible service experienced and just my entire experience with OK Furniture. I decided to settle the account a few months earlier, this being in April 2019. After several calls and promises that I'll receive my settlement letter I waited 5 months for this until yet again having to personally go to the store and complain about this before receiving the letter. Thinking this was the end of this terrifying experience, the "new, replaced JVC tv" also just went blank after 8 months. I again took it back to the store, was told that it could only be replaced with a Hisense of "their" choice and I was told to collect, I rushed home before the store closes and drove to collect. When arriving at the store I was told that new policies were implemented and I cannot receive the tv unless I pay an amount of 400 for tv licence. I am extremely disappointed with my entire experience with OK Furniture. I do not want anything from this store, I just want my money back, that has gone to waste for a broken product and poor service.
Comment
COMPLAINT #2241 - Customer Service Issues

Zinhle Nxele
Unfixed washing machine
I bought a washing machine at Ulundi OK Furniture in June 2019, while I was using it in September, the spinner wasn't working properly I took the matching back to the shop at Ulundi OK, they took my details on the slip and told me to return back with the machine and said they will bring the defy team within a week to look into the problem at my place of stay I shouldn't leave the machine at the shop,I then went back home and been waiting for the defy team but up to today has not got any call from the defy team nor from OK furniture retailer, but he promised me that there won't be any mistakes he will be the one to ensure that the defy team come to my house and he will keep calling them. So now what should I do?
Comment
COMPLAINT #2201 - Repair Issues

Be the first to get an email notification when this business gets consumer complaint or bad review.
2 subscribers