Adejobi Emmanuel Adeboye
I credited my account for more two weeks and not yet credited
I credited my sportybet account. 09020604806 on wednesday 15/07/2020 at 22:56 with the sum of 3500 through gtb account 0164729143 but to my surprise the sportybet account have not been credited as at 29/07/2020 at 09:53, I logged a complain with sportybet on the 17th which they said is from my bank then I contacted my bank since on the 17th they said they are awaiting response from sportybet since 17th and anytime I called my bank to know what is wrong they said they have sent a reminder to sportybet.since when gtbank has been sending mails to sportybet they keep ignoring whereas they will respond to my anytime I send an email, I'm now in the middle
Comment
COMPLAINT #4809 - Delivery Issues

Nelson Ameda
Fail to pay me back my winning bet
I won a bet of 1600 Ghana cedis anytime I try to withdraw the money they say fail , fail and pending . infact I have try about five hundred times to withdraw the money but unable to do so.I have also call the customer service about 200 time all what they told me is I should use the money to stick bet again before I can withdraw it .l listen to him and I use it to stick bet and I won 2100 cedis again I also try to withdraw but it fails I also called they told me to stick more several bet before they pay me.up to dat they haven't pay me it about a month getting to two months now. Am using this medium to tell the manager to seek immediate action to pay me back my money in a polite manner and I know u will do so. Thank u.
Comment
COMPLAINT #4660 - Customer Service Issues

Augustine
My. Bet. Slip got missing today
My running bet slip of about 6 teams got missing about 30. minute's before the game ended
I checked my bet history so many times, but can't found it, Sportybet has stolen my money
This is my experience with this company
They are not a company to be trust 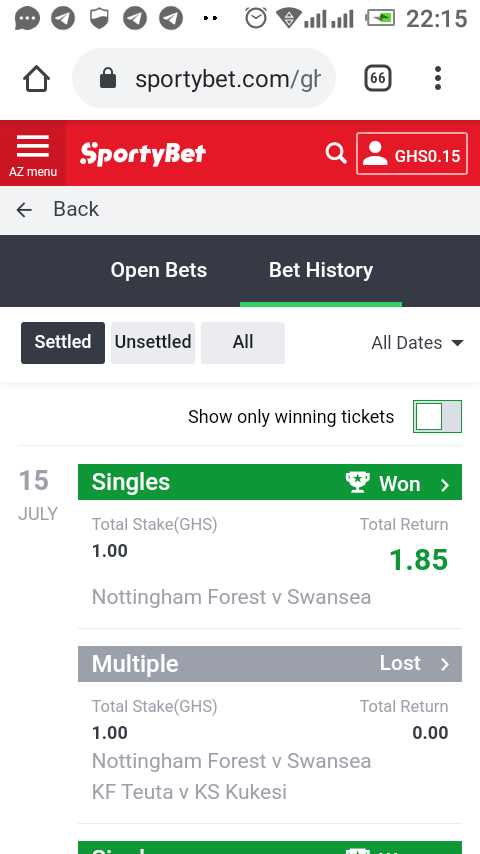 Joseph Lee
STAY AWAY FROM SPORTY BET
I played a game yesterday being 5th July 2020. I Played this game
(FC UFA - URAL) Which i picked Draw/Draw which means Draw both halves. Ir came out positive but Sportybet showed me Lost, I contacted them via livechat, the guy was busy being giving me a fake result saying that the game failed. When i showed him a screenshot of the games on Livescores, He left the chat still insisting on his fake result. Please Sportybet Ghana Can't be Trusted

STephen
FUNDS NOT GOING THROUGH
They refuse to release my funds. I don't know if they're broke or what? I won 9000 cedis a while ago, I've called their customer service, which doesn't work btw, whats the point in having a line to call when it doesn't work?

When you text them, they play the blame game, blaming your service provider and stuff like that. They are scammers which is not suprising when you take into consideration that even the winnings being displayed on their site is fake.

In a week, if my funds are not released, I'll be filing a law suit. When I'm done with them, they'll file for bankruptcy. I'm really pissed rn
Comment
COMPLAINT #3933 - Billing or Collection Issues

Kwame Appiah-Kubi
Balance insufficiency
i have Ghc 5 in my account and I’m trying to stake a Ghc 5 bet but it keeps telling me my balance is insufficient. what’s the problem?
Resolve it immediately. Thank you
Comment
COMPLAINT #3349 - Customer Service Issues

Eric
Won bet not be paid
I won't I bet and up now my account has not be credited. What is the issue to credit my account ?
I need immediate answer
Reply by Bayor henry on 23 May, 2020
I won I bet but money is not coming y
Comment
COMPLAINT #3052 - Other Issues

Emmanuel paintsil
Wrongful rollback of winning
Hello.. My bet with bet id 200416190227bet83335190 has been tag wrongly after bet won and a rollback effected in the sum of ghc725.This is wrong as other betting companies have my selection winning. Please resolve this mistake promptly
Game id 7789/ 16/04 19:30
Thank you 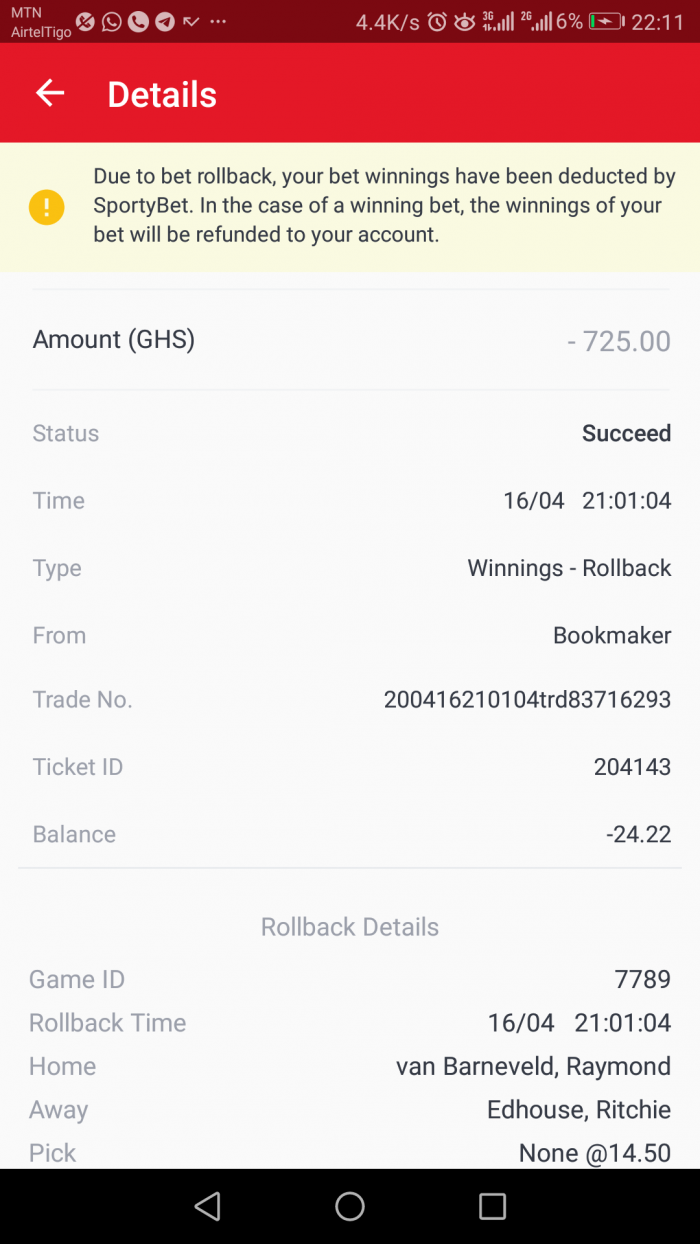 Ntiliban Nnandor
Bet slip code bc37e2kc
The above betslip since yesterday was cancelled in the course of play and I was not credited my refund. Due to that, the above betslip can't settle.
Reply by AGYEI RICHARD on 9 July, 2020
They are fake. I wanted to withdraw my own money from my sportybet account. Come and see what they are telling me... we cursed them.They say they offer 24/7 support tweaaa***
Comment
COMPLAINT #2843 - Refund / Exchange Issues

Iddrisu Nuhu
I have won a bet but it was categories as a loose one
I placed a bet on Antalyaspor or over 2.5 no and the score was galatasaray 5:0 Antalyaspor what shows that the bet has lost
Reply by Abena Basing on 11 July, 2020
I won a bet and it was considered as lost bet bet ID 19609
Comment
COMPLAINT #2449 - Other Issues

Isaac Asare
unpaid bet won
i have won a bet tocket yesterday but one match has been tagged as not started whiles it has been played.
Reply by Seth osei on 20 December, 2019
My 49.50 cedis transaction into my sportybet account that failed has not been paid back.
I need my money now please.
Reply by Kennedyberry on 19 March, 2020
I also had unpaid bet ticket right now and am calling the office line no response,pls I want my bet paid today
Reply by de-Souza Worgbeyi on 25 June, 2020
Can you please help me with their office line. The chat section seems to be an AI
Comment
COMPLAINT #2426 - Service Issues

Audry Weseh Avilugu
Unsuccessful Deposit
Unsuccessful deposit to my bet account. Meanwhile funds have been moved out of my mobile money account. I am running out patience, pls rectify asap...my number is 0244608072.
Reply by Mensah martin on 2 December, 2019
My money have been deducted from my mobile money accounts but have not show on my bet account 20gh my number is 0547510090
Reply by Stephen Kweku Aryeh on 19 April, 2020
Hi I just deposited 30 cedis into my account bh didn’t show please what is the problem
Comment
COMPLAINT #2381 - Other Issues

Annes Yunus
Friday's Game Still Ongoing
I placed a bet since Friday and I won all the matches I staked. It's still telling me that one is ongoing since friday.ive been expecting my money to be in the account by today but still nothing is there. Kindly check it out and work on it for me As soon as possible.

Twum Kwabena
I won a bet but you said i lost.
Yesterday I staked a bet and I won but you said I lost the bet .And the game is basketball that is Galatasaray win and the final score is 84:83 but you have carried my bet to lost bet. 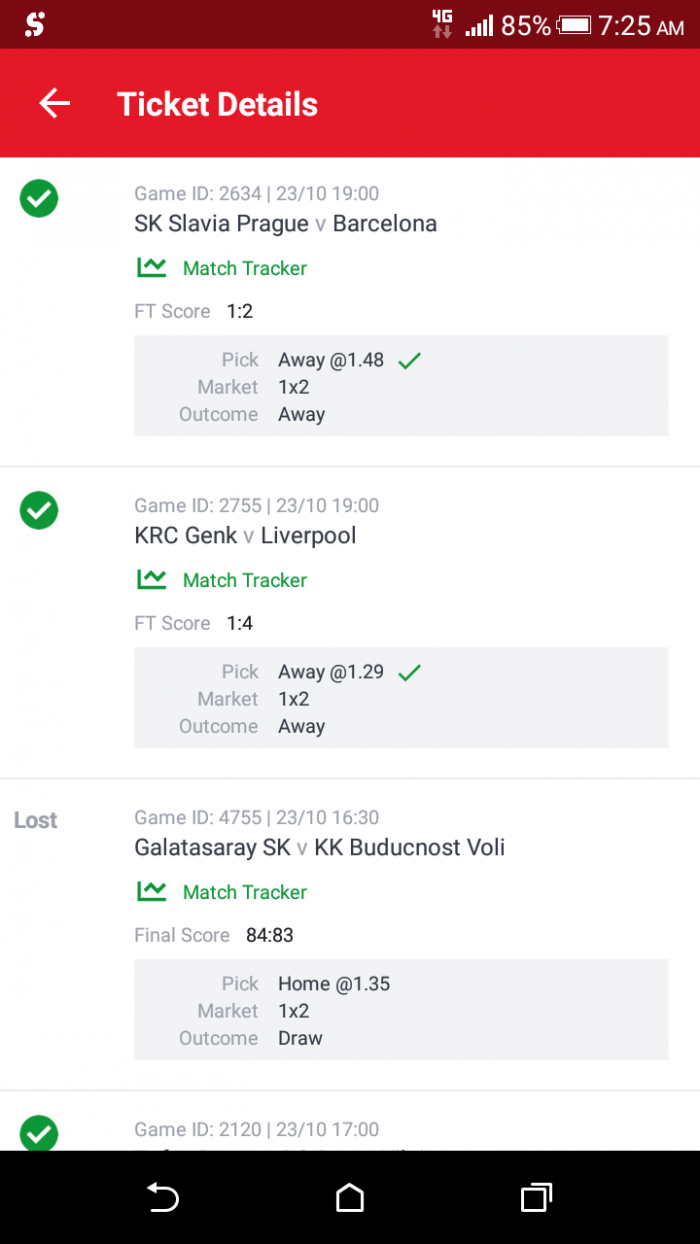 Reply by Raymond Sarpong on 10 December, 2019
I’m facing the same problem and I don’t know how to solve it since none of their staff a willing to listen to me.. I won a bet and it has been added to my lost bet
Reply by Kwasi Boadu on 3 July, 2020
Why is sporty doing this? I've won my bet but they aren't giving me my money. I just don't understand. I'll take them to court if they refuse to give me my money. Why are u guys doing this
Comment
COMPLAINT #2236 - Refund / Exchange Issues

Linus Alan Shane Tsyokplo
Failure to make payments
Made a withdrawal request via their app and yet to receive the payment. They have since approve subsequent requests but failed to approve my previous requests but debited my account accordingly.

Reply by Eric takyi on 17 October, 2019
Please I have won 100cedis on my sporty bet wallet but am trying to make a withdrawal. but I can't... Is on pending since yesterday
Reply by Seidu adamu on 12 December, 2019
Am facing the same problem now
Reply by Daniel Nyarko on 9 April, 2020
I just won a bet but it has not been credited to my account rather categorize it as lost.
Details as follows
Game ID:2396|09/04 13:05
Sheet Trollei v Chetyre Ledokola
Final score 4:3
Pick Home or Away@1.37
Market Double chance.
Pls do something before advise myself. Good evening 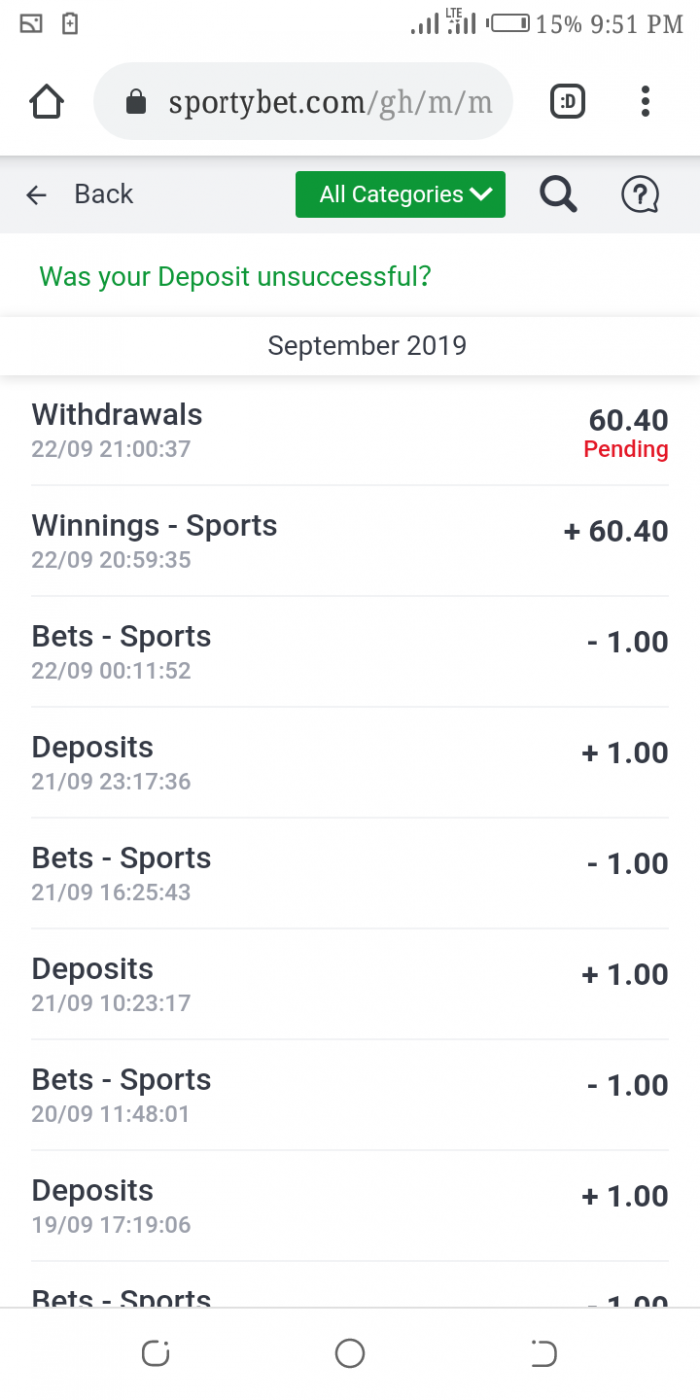 Enoch Ackon
Money on pending not refunded after depositing
I made a deposit into my account and it was pending. It failed later on expecting the money to be in my account but it has not reflected as at now. Please why?
Comment
COMPLAINT #2136 - Refund / Exchange Issues

Mohammed Abdul Rahaman
Pending withdrawal
I MADE A WITHDRAWAL OF GHC 70.00 ON THE 7TH OF SEPTEMBER 2019. THE MONEY WAS DEDUCTED FROM MY BETTING ACCOUNT BUT NOT REFLECTING IN MY MOBILE MONEY WALLET. I CALLED THE HELP LIVE LINE BUT COULD NOT RESPOND TO MY CALL. I JOINED QUEUE WITH MY REPORT AND ALSO YIELDED NO GOOD RESULT. 0544190005 IS MY CONTACT NUMBER 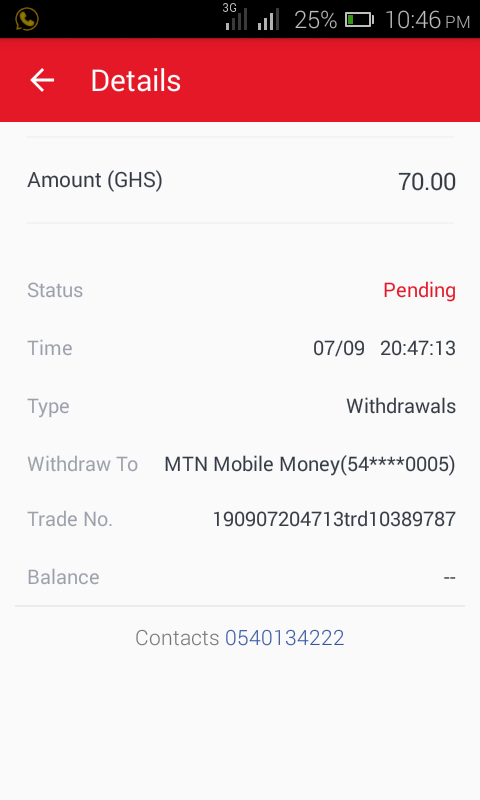 Be the first to get an email notification when this business gets consumer complaint or bad review.
24 subscribers