david groome
have been missold an upgrade and treated poorly by staff
am a client of over 20 yrs. in February 2019 contacted Vodacom Online to see if any good data upgrades available. i was on a 24month 5gig data package at the time which as expiring. the lady who helped me told me there was a special deal on offer for 20gb data at R199. i asked her if it were an April fools joke she laughed and said no it wasn't. i agreed to the new terms effective from 1st March 2019. a great deal. Not even 2 weeks later Vodacom sends out e mails informing clients of increases. i check and see that the std 20gb data plan costs is going up from R504 to R524. as i am not on that plan as i was offered a special deal i contact Vodacom Customer care to query it just in case. they simply tell me that tough they have 20 business days notice to change terms. i ask them if they are insane - they sell me an upgrade 2 weeks before at R199pm andnow want to increase it by 163% to R524pm. i send them a long email telling them why it cannot possibly apply to me but the jus say our 'feedback remains the same' no interest in my argument or predicament. i cannot afford R524pm and if i had been told that the special is only for 1 month of the 24 i would never have agreed to it and would have stayed on my 5gb contract. but they don't care. they either don't understand my argument or don't give a damn, this is a highly irregular way of doing business if not illegal and i will not have it. the customer care staff are either unaware about the existence or terms of the data their company offered me or they intentionally as a company a whole missold me an upgrade contract which they it seems have no intention of honouring. i want someone to take my complaint seriously and treat me with respect not fob me off!

Nancy Stewart
Claim filed 17 Feb and they refuse to communicate.
My claim was processed at Eastgate mall and after 2 weeks of hearing nothing i called and emailed Vodacom insurance but nothing. I call the Vodacom shop but they could tell me what's going on . I did a claim online 2 weeks ago and still nothing . 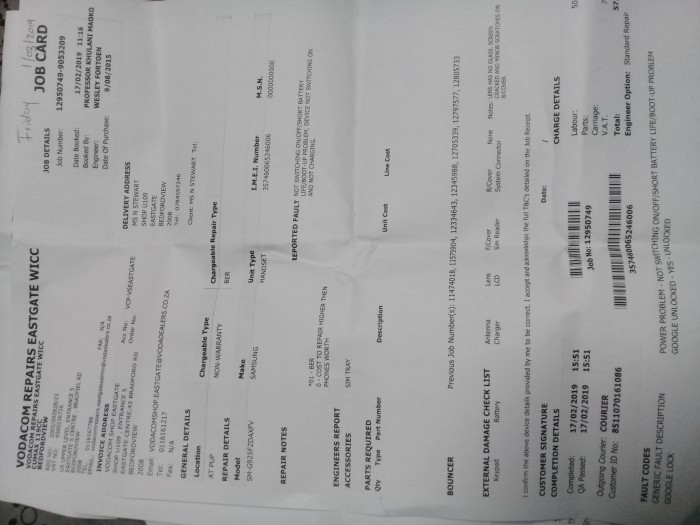 Mrs Spiers
Contact
Also we have been charged evey month for a contact which we cancelled over a year ago for R46 a month. This we have also been trying to sirt it out as well.
Comment
COMPLAINT #1689 - Service Issues


I want to complain about the service at the mentioned vodashop.  On the 7th January we went to report that my daughter's iPhone was stolen in mosselbaai when we where on vacation. The iPhone had insurance that I paid every month at vodacom. I was told that they will claim and come back to me. Two weeks later I phoned and was told they are busy with the claim. After a month I was told that the claim was approved but they do not have the phone in stock.  I said any iPhone will do even a 6. She had the 8. As long as she has a phone. Another 2 weeks later I was told the phones are on a backlog. I asked if they cannot give me any other phone. Today I was told that they have all the papers and I can come get the phone. I drove from kroonstad and waited for more than an hour while they got the paperwork. The manager came to me to tell me that they cannot give me the phone because it must be cleared or something.  I was so angry at that time that I told them their service is pathetic. It has been almost 2 months and still they are full of excuses.  I have been a vodacom customer for more than 20 years but I feel that this is the worst service I have ever seen.  I want to cancel all my contracts and those of my family.

Magaretha Johanna Schoonwinkel
Pathetic service form Vocacom Insurance
I’m a very unhappy Vodacom Insurance customer.
Vodacom insurance is very quick to take my money every month but in return I receive no service.
I’ve been try to get hold of Vodacom Insurance since Tuesday 5 February2019, it’s now 10 days. Nobody answer the phone, it’s just the pre-recording and the call get cut. I tried to phone Finrite directly, yesterday a lady at reception took down my details and promised an administrator would call me back as they are experiencing high call volumes. Nobody call. Again I called Finrite directly today and my call just get forwarded to Vodacom nobody answer.

Jane Noble
One Year to cancel a contract???
After almost a YEAR of phoning, e-mailing, going into your Vodacom shops and asking your “Customer Care” agents (at least 5 times!!!) I have probably used a full tank of petrol, because I was told to go to Gateway, and I live in Pinetown – then when I get there I’m told “Oh no, you don’t have to come here”. I have called 082 111 many times, and spent literally hours on the phone, trying to sort this out. I am still waiting for this contract to be cancelled and for my refund for the deductions made from my account for the contact number 076 411 9959. This tablet is broken, so it’s not as if I have been able to use any of these months of data you have charged me for. Only on my most recent desperate call to a one of your shops, was I informed that you say that I should have sent this e-mail to this address, and that because of this, I will not be receiving any refund.

WHY HAS IT TAKEN A YEAR FOR ANYBODY TO TELL ME THIS??? WHY WAS THIS REQUEST IGNORED BY THE ABOVE DEPARTMENTS. WHY DOES NOT ONE MEMBER OF YOUR STAFF IN ANY OF THE ABOVE SERVICE CENTRES CARE ENOUGH TO EVEN TRY AND HELP ME??? NOBODY CARES, NOBODY TAKES RESPONSIBILITY, NOBODY DOES ANYTHING TO RESOLVE THIS!!! EVERY PERSON I SPEAK TO WANTS ME TO COME INTO THE SHOP, AND WHEN I GO IN, WANTS AN E-MAIL. ROUND AND ROUND AND ROUND I HAVE BEEN SHUNTED. IS THIS DELIBERATE? IS THIS HOW YOU PREVENT PEOPLE FROM CANCELLING CONTRACTS? WHEN I GO INTO THE SHOPS, THERE ARE NUMEROUS SALES AGENTS LOLLING AROUND WAITING FOR “WALK-IN” CUSTOMERS, AND ONLY TWO CUSTOMER CARE AGENTS, WHO I HAVE TO WAIT AT LEAST HALF AN HOUR FOR. I AM TOLD THAT ITS BECAUSE THE NEW CUSTOMERS ARE MUCH MORE IMPORTANT. THIS DEPICTS QUITE CLEARLY THE VODACOM ATTITUDE TO CUSTOMER CARE.

I REPORTED THIS FRAUDULENT UPGRADE TO YOUR FRAUD DEPERTMENT, BACKED UP BY AN AFFADAVID DONE AT THE POLICE STATION. I am told that the upgrade has been cancelled. Where is my refund for that?

I cannot believe how shockingly bad your service has been. I have been a Vodacom customer since the beginning, and I believe I deserve better treatment than this!!!!

I’m giving you a week to respond to this, and if I do not get satisfaction now, I am going to broadcast my experience and opinion of Vodacom over every network I have at my disposal.

Up until now, I have been polite about this, but now I am bloody furious! Get back to me.

Caeleane Clack
Vodacom can never get it right
Good day,

Once again it takes me by no surprise that calling Vodacom with a problem resolves nothing.

You have the rudest Call Centre agents and Supervisors ever.

One of the Supervisors ‘Ashwin’ on the 0821946 number is probably the worst.
He kept talking over me and wouldn’t allow me to talk.
I then told him to put me through to another Supervisor who was evidently briefed by Ashwin and he was just as rude.

I have been a Vodacom client for 16 years!

My problem is that I was not working last year, I’d been retrenched.
I let Vodacom know I’d pay as soon as I could. They soft locked my line but I could at least receive calls.
In Oct/Nov I got money in, called 0821946 and was told I needed to pay R8200 to be able to use my account again.
I’d made an arrangement to pay in 2 installments.
I paid the first R4171 and by the time I had to pay the 2nd half the company I worked for didn’t pay us.

I called 0821946 and said I was starting a job on the 8th January and could I sort my account out on the 31st January.
This was arranged.

Now it’s the 20th of January and they’ve hardlocked my account.
The 4 agents I spoke to and 2 Supervisors can’t seem to grasp that the 31st January is still coming!

I cannot not be able to receive calls!

Can someone please get back to me with a sensible solution.
I have been your client for 16 years!!!!
Comment
COMPLAINT #1506 - Billing or Collection Issues

Erna du Randt
Terrible service
Sorry to say the service is pathatic dont even switch phone on to see real problem. Overheating a real timebomb but heat crack screen now its my fault. Sorry to say i am done because not one listen to you the client vodocom just see clients money and te hell with my problem . Already receive statement no phone but money they want. Thanks a lot for no service . 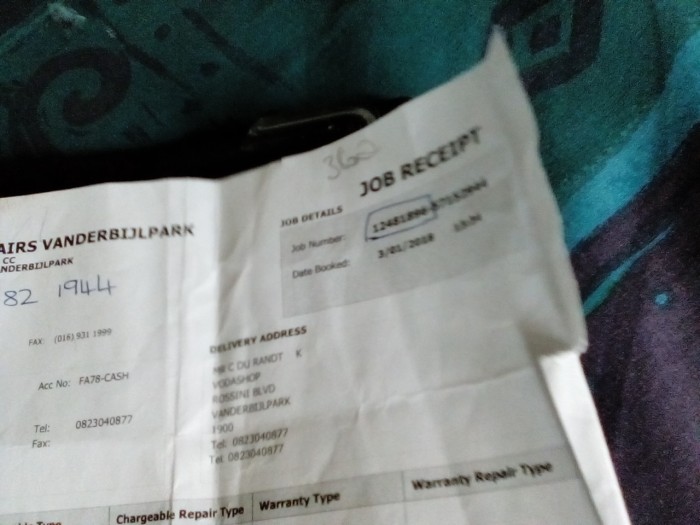 John Lucas
Credit not passed for payment
Credit not passed on Vodacom Account dated Nov 2017
Shocking service. Since 16 Dec I have visited your Canal Walk offices in Cape Town, being asked to email 5 different persons at Vodacom, phoned call center countless times and emailed your CEO on 21 Dec 2017 and again today and still have had no response. Each time provided proof of payment and was told that Vodacom had technical download problems with electronic payments in Nov and the problem would be resolved. Some of the responses I received were to double pay and credit would be passed to avoid being blacklisted for non-payment which has nothing to do with the problem as I did pay, Dispute was logged on 18 Dec 2017 and nothing has been done. This afternoon received my statement dated 3 Jan 2018 and the amount of R874.18 has still not been credited. How will this be resolved ????????

JACOBUS PETRUS JONKER
Poor communication service from provider
I have received 12 years of service from Cell C service provider and no problems of any kind. I was persuaded by someone to take out a vodacom contract, to my regret. I am currently 1 mnd and 2 days at vodacom and has been stranded for 4 days during this time due to communication. It is not that we are out of reach of cellphone reception in Ladismith western cape, the mistake is at their towers. At the same time i used my old Cell C phone and phoned clients and they could reach me. I complain about it to their service centre and they will respond in 48 hours.I will terminate the contract because they do not provide the service the promise. Why go from a good service provider ( cell c), than to a weaker one (vodacom). NICE SERVICE VODACOM, i will not recommend anyone to you !!!!!!!!!
Comment
COMPLAINT #1485 - Service Issues

Thato Ramela
Sim card blocked when i have made a paynent last week friday already
I have paid money to Vodacom 4u The Glen last week Friday already but it is not reflecting. I have paid R487.50 and now my sim card is blocked
Comment
COMPLAINT #1481 - Billing or Collection Issues

Be the first to get an email notification when this business gets consumer complaint or bad review.
18 subscribers