Jan Lawrence Alberto
Delayed delivery, Lack of response
My item came from Misamis early this May, your track on website says it is on San fernando Pampanga delivery hub since May 20, 2020.. Waiting for it to be delivered in Apalit, Pampanga branch. Today May 28, 2020 and still there. We ordered items because we need them. Cant really understand San Fernando to Apalit, 8 days and still stocked there. I tried to contact your customer service and even on you facebook page. No response or some computer bot response only. Here is the tracking number 139669354281
I hope you do necessary actions because these is not so acceptable without valid reason.
Comment
COMPLAINT #3298 - Delivery Issues

CHRISTIAN VICTOR TAGUAS
Package Undelivered
On the 7th of May 2020 my cousin sent me a package from LBC GUIMARAS and I told her that I'll just pick it up if its in St Joseph Cainta, but the clerk in the Guimaras Branch told her that its closed due to lockdown but everytime that I go out I can always see that there's a long line a lot of package delivered in that branch so it's totally nonsense that they will say that its closed. So since it happened they suggested the SM Hypermarket in Cainta which so far away fron my address and I dont have any means to pick it up there. So I my mom and cousin if they can possibly have it changed from pick up to door to door and the clerk that i spoke with over the phone said that once the package arrived here in manila the sender can go back there in Guimaras branch and have it changed and they did. And until now, i keep on sending a message to the customer service in twitter and they always reply a day later and not assisting me properly. They always told me that it have been escalated but no feedback yet. So how am I gonna get it? If it won't be delivered this week its almost a month already that it's in possession of LBC I would need to be reimburse with the amount of the item, delivery charge and the expenses my mom and cousin spent from going back and forth to the LBC BRANCH IN GUIMARAS. This needs a very urgent resolution.
Comment
COMPLAINT #3283 - Delivery Issues

Paul John Marquez
Poor Customer service and poor service provider
I'm trying to track my shipment that's about to deliver to me as a consignee. However some issue occurred as reflected on the LBC track and trace while in delivery attempt. as per advise, have to contact the customer service with a given email address.


I tried to email your customer service for 9 times and i tried follow up's to ask for any action should i take in order to deliver my Shipment but no one answering ng concern.

They didn't even contact me for any reasons before they returned the shipment to SCS returns as per satus on track and trace.
Comment
COMPLAINT #3252 - Customer Service Issues

Kimi Olarte
My parcel
Today, March 19,2020 . I haven’t receive my parcel at lazada, When I check the status it says “delivered” how come I havent receive yet. What happened? Im very disappointed, thats why I filed a complaint. Please ayusin nio service nio. Kaya hindi umaasenso ang Pilipinas sa poor service at kalokohan. Or ako mismo susugod sa main branch nio. Contact me if u want. 09087207680. Not happy at all. 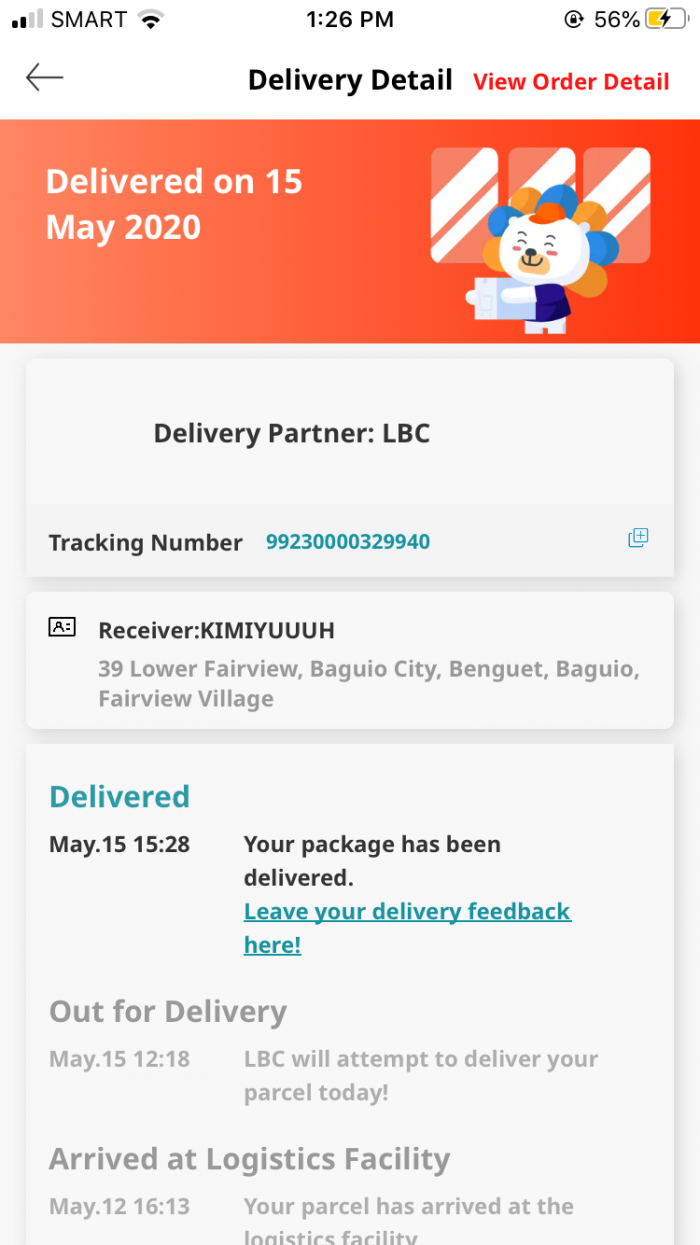 Celerino Martija
Poor Customer Service Lipa LBC Delivery Team
Our cargo was in Delivery Lipa Hub since 11 May, until now it is not delivered yet. TRACKING 1099336430. It includes important baby essentials that we need ASAP.
I tried calling all active number of LBC Lipa but cannot contact them.
Please deliver ASAP.

Mantissa R. Samson / Ma. Pilar R. Samson
lacking items in the box
we just received today April 29, 2020 the package with the tracking number 1153793768. The box is not full already and some items are missing. I hope you resolve this problem. Thank you
Comment
COMPLAINT #3021 - Delivery Issues

Raquel Reynolds
My package was opened, some items were stolen, and retaped using the LBC packaging tape
I would like to report the package which I sent to my sister in Pandan, Antique last April 17, 2020 through LBC Poblacion, Mabalacat City branch. I was assisted by two LBC staff, one of whom named Daisy Munoz to pack, tape, and sign the box. However, when my sister received the package, it had been tampered. the original tape of the box with signature was cut and was re-taped using the LBC packaging tape. And some items were stolen and left the ripped plastic containers inside the box. It’s obvious that someone at LBC opened the package, stole the items and retaped it.
Comment
COMPLAINT #3018 - Service Issues

Maribel Kassin
LBC money send remittance
Yesterday morning I went to LBC MC Arthur highway Balibago Angeles City. To send Palawan remittance to my friend. The duty staff name was Mark Anthony Pangilinan. I have three kinds of transactions. After I paid all the payments I headed home and text my friend the secret number that she can claim the money to any branch of Palawan. Later that she text me that she can't get the money because it's not in her name.Then I checked my receipts to my dismay It's a big mistake I'm the sender and I'm the receiver too. I immediately went back to the LBC courier service to Mr. Mark Anthony Pangilinan to check and change the name of the receiver he apologized assure me that he will correct it and everything will be alright. He even give me his cell number. The next day Tuesday that's today April 28 morning I received a text from my friend that she went back to Palawan to claim it but she was told to proceed to LBC to verify the sender and who's the receiver.My friend went to the LBC and talked to Mr. Mark Anthony and she was told there that the money was already claimed. My friend was totally pissed because she didn't received the money.My friend went home and text me that LBC was denying all about the money she supposedly to claim. I was worried and I need explanation I called up Mr.Mark Anthony to know what's going on and who claimed the money that supposedly to be claim under the name of myfriend.I went to LBC to track down and investigate my money to be send to my friend.

As I talked to Mr Mark Anthony Pangilinan he said my friend Ms. Pelaez came to claim the money but they couldn't release it to her because in their computer system it was already released from the Palawan. MS. Pelaez explained that shes been to Palawan but they did not give the money to her. Because it's not in her name as a receiver.

My question was how come it was in LBC computer system already released but yet no claimant??

Mr. Mark Anthony Pangilinan assured me that he corrected and changed the name of the receiver I paid 195pesos for the fee.I demand for the refund of paying such fee and taking all the hassle of claiming my own money. I'm the sender and I'm also the receiver.
You check the attached evidences receipts from LBC and the Palawan please.

Take note of this case seriously.If I did not trace and investigate my money order maybe my 10,000 already disappeared for nothing. 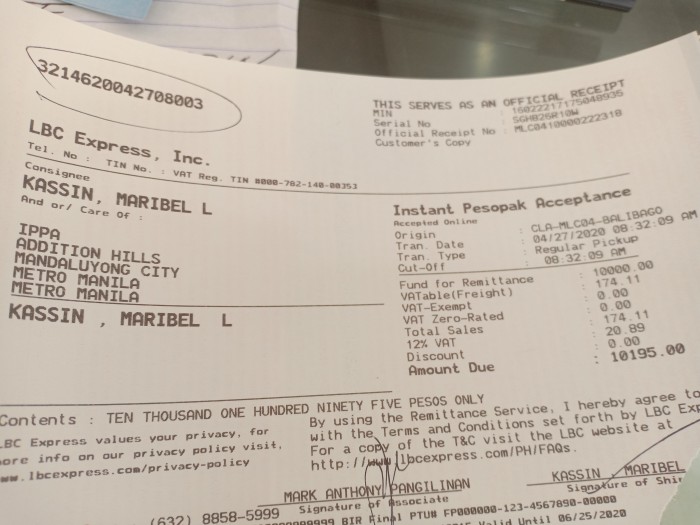 Reply by princess nazaire on 19 May, 2020
tracking number 362047534940 has been sent to the wrong location by your Cebu employee, as she insisted that they can only send the packages on your cavite south branch. FYI I've been sending/receiving all other package from lbc during Ecq. I've been calling several times a week for over 2 months! I need a refund of 11k for the medicine stuck in your branch!!!!
Comment
COMPLAINT #3011 - Other Issues

Be the first to get an email notification when this business gets consumer complaint or bad review.
0 subscribers